skip to main | skip to sidebar

CAN WE GO BACK WHERE WE BEGAN? 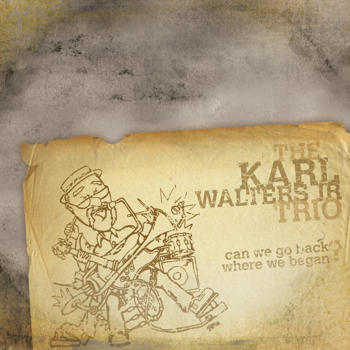 If someone asked me how to define The Karl Walters Jr Trio's music I'd say something like Motion-Static music. Sometimes when you listen to them you feel as if time didn't exist, but suddenly things will have a turning point where all the time that you didn't thought was there is catching up. That's the core of this Motion-Static merge that Matt Ferry on Drums, Westbrook Johnson on Trombone and Pedals, and Keegan Schelling Bass and Pedals added up. This moody trio explores different sonorities that encircle simple musical textures and aggresive New York behavior expresed by electric motionless sounds.
The intriguing part after listening to their music came when I read their notes:
"Can We Go Back Where We Began?" If so, could we keep all that we've learned in getting here? Would our new knowledge rebirth our old places? Or would we walk the same paths, take the same turns, and arrive again here?And if we could reach a new place from our old beginnings, would our present place become "where we began"? Upon arriving at this new place, would we only desire to return here, to where we began?
So, while you reflect on the idea you can listen to their music

Posted by musicblogspace at 7:51 PM

Motion-Static? I'm very interested...never have I heard a genre that I like enough to possibly use it as "the" genre of music we play. Thank you for that gift, and for checking out the CD.

If you are making it out to the show Thursday, bring your dollars, the CD will be on sale for the low low price of $10 a pop!!! Or, you can visit the web site to learn more about future shows.

Yes, Motion-Static as you define it is a good term. This is especially appropriate during the pedal laced trombone washes that sustain harmonic tension on the high end while the bass and drums press on through their progressions.

It's exciting to hear another young band follow in the footsteps of Kneebody by infusing funk rhythms and rock timbres into jazz improvisational sensibilities. The composed sections are especially invigorating with their eerily familiar melodies stretched taught by the jerky time signatures that pull them.

The truth is I wasn't planning on defining your music genre because as you know I don't believe in tags, but to me it's very important to describe things to people that don't know them so I was just trying to express the feeling that the music caused on me. Anyway, I'm glad you adopted it and I'm happy to hear you took it as a GIFT! Wow, so I guess now I'm officially a music critic uh? hahaha

We're all music critics, the same way we're all life critics, I think the only distinction is whether or not we get paid to do something...